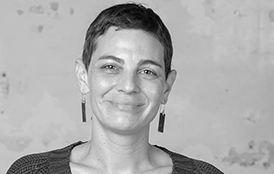 She is a member of GREDITS, Group of Research in Design and Social Transformation at BAU, Design College of Barcelona, attached to the University of Vic, Central University of Catalonia, where she works as a teacher in the Department of Art and Coordinator of the Culture Area.

Rebecca was one of the founding members of the ‘Cultural Association AtelieRetaguardia. Contemporary Heliography in Barcelona (2007-2012)’, a working group devoted to research and the artistic practice of photography. Since 2014, she has co-ordinated Factoría Heliográfica (Heliographic Factory), a research and production centre offering the planning of different services related to the audiovisual medium in Barcelona.

Her personal work has been exhibited and published in various institutions and galleries, such as the Tagomago Gallery in Barcelona, 2010; Éclats de la Photographie, Musée Adrien Mentienne, Bry-sur-Marne (France), 2011; and La Virreina, Centre de la Imatge, Barcelona 2013-14, among others. In 2001 she won the Antonio Saura scholarship awarded by the General Council of Huesca for implementing the project ArquitecturArchitekturArchitecture.