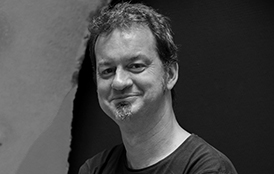 He is a multidisciplinary designer with experience in commercial and non-commercial projects, which are often closely related to art.
He graduated from the Gerrit Rietveld Academie in Amsterdam and the Faculty of Fine Arts at the University of Barcelona, ​​and also studied at the Elisava School. Before the creation of a super studio in 2002, Work in Amsterdam, Budapest and in various studies and agencies in Barcelona.
He is a professor of design universities in Barcelona, ​​conducts workshops and lectures at festivals and universities. He has been invited to participate in international jury awards, and has also received more than 50 awards, including the Grand Laus or the Golden Bee