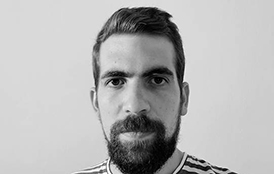 Interested in different audiovisual disciplines, he has developed his professional career as a director and editor. He directing short films such as Dr. Jekyll vs Sergio (2015) and Alava (2016), and codirecting the documentary feature Judas (2017). As an assembler he has worked in different areas of the sector. He currently specializes in sponsored content pieces for brands.

Investigate the collision in the image between two space-times. Specifically, the fractionation that occurs in the representation due to the internal assembly between figure and background.

The split image: the rear projection with expressive value.

Scholarship for the extension of artistic studies. Prince of Viana Institution (2013-16)