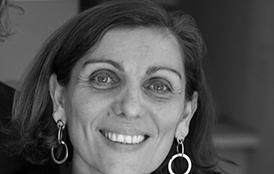 Architect and Urban Planner. Specialized in the design of public, educational and exhibition spaces

Architect, teacher, researcher and popularizer. Professor at various universities and national and international entities (UdG; UPC; UOC; Escola Sert-COAC; UNAL, Colombia; La Salle, Bogotá; UniBo-Bologna).
Co-director since 2000 of the mayorga+fontana arquitectos studio based in Barcelona, ​​Naples and Bogotá. Through her professional activity, she has developed public space projects, improvement interventions in educational centers and campuses; design of exhibition projects and housing renovations.
Co-director since 2017 of the City F.O.V. Urban Lab in Barcelona, ​​where they work on habitability and architectural and urban sustainability, exploring new technologies and modalities of technical-participatory processes from a transdisciplinary approach. They carry out commissions (plans, programs, projects) for public entities and municipalities and also collaborate in research projects with universities and cultural entities.

She investigates the relationship between architecture and city, especially between building/urban space, emphasizing the interscalar and interdisciplinary approach to the project, from the comparative view of the morphology and topology of space. The role of the intermediate spaces, the thick facades, the ground floors and, in general, the "in-between" spaces stands out as fundamental articulators to understand our environment and its multiple relationships.
She also investigates in the field of visual culture as a project and design tool, with special emphasis on the relationship between cinema, architecture and the city and on the approach to the project through photography and image, in its dual role: as projection tool and as a research topic.
She has collaborated in several projects financed by the Ministry of Economy and Competitiveness of Spain and has been linked to several research groups in Italy, Spain and Colombia. She has participated in international conferences and as a guest speaker at entities and universities in Spain, Italy, Portugal, Colombia, Mexico, Ecuador, Argentina, Chile, USA.
She has been a curator and designer of various exhibitions in Italy, Spain, and Colombia.