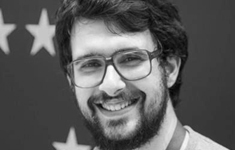 A specialist in Direction and Editing

Fernando specialised in Direction and Editing at the University School of Cinema and Visual Communication of Catalonia (ESCAC). His short film Alto Sauce has won several awards such as Best Short Film in Küsterdorf (the Emir Kusturica festival) and the Mediterranean Film Fest (Rome), and has also been officially selected by a hundred festivals such as the Short Film Corner in Cannes, Premiers Plans (Angers) and the San Sebastian International Film Festival. Alongside his own projects, Fernando also works as a scriptwriter, editor, director and teacher. He is currently working on the children's animation series Cheeky Anna, which he co-created and co-directed with the French animation studio Les Armateurs (Ernest et Celestine) and Folimage (Une vie de chat), both of which are Oscar nominees