We use proprietary and third party cookies to provide our services, customise and analyse your browsing, and display advertising related to your preferences. If you continue to browse, we will consider that as acceptance of their use. You can adjust settings and view more information in the cookies policy
Accept
Diseño de sistemas visuales 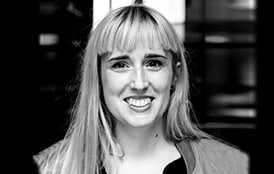 Multidisciplinary designer at What The studio

After beginning her professional career as an art director for a variety of audiovisual projects, Ekhiñe worked as a graphic designer at the Twopoints.net, De Designpolitie, What Design Can Do and Thonik studios, as well as collaborating with agencies such as Vruchtvlees, before becoming a co-founder of What The studio. Ekhiñe is a multidisciplinary designer with a conceptual approach whose work focuses on communication design. Through a process which greatly values research, Ekhiñe's work concentrates on the development of robust visual systems, experimentation with typography and the creation of visual languages with immense communicative power.

What The is an Amsterdam-based design studio founded by Sara Landeira and Ekhiñe Domínguez which develops many types of communication projects, whether they relate to visual identities, campaigns, event design, printed publications, web design or art direction for photo shoots.

What The studio works with a diverse range of clients including Amsterdam University of the Arts (AHK), Nederlands Theater Festival, the Makers Unite collective of creative refugees, the world famous ice cream brand Ben & Jerry's, and the Dutch Ministry of Justice and Security (Ministerie van Justitie en Veiligheid).

In the past year, What The studio’s work has been acknowledged with a Dutch Creativity Award (from ADCN), an Innovation Award (from the Dutch Ministry of Justice and Security), and two nominations for the European Design Awards.